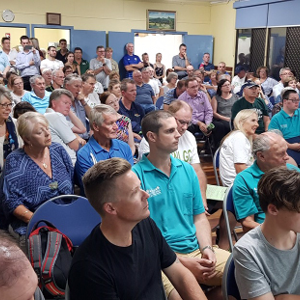 The Proposers were represented by Justin Harrison of TVRG, Simon Forsayth (Town Planner) and Peter Kelly (Consultant). The Save North Lakes Golf Course Management Committee was represented by Phillip Carlson, Ryan Harris and Matt Williamson, Justin Harrison opened the Forum to make it clear that the Golf Course would close, his retirement village would be built, taking up 11 hectares of the 70 hectare Golf Course with some 57 hectares being returned to the community as “open space” for which he was seeking community comment on its future use.

In return, Phillip, Ryan and Matt were adamant that there were significant legal questions as to the validity of TVRG’s proposals and that North Lakes residents who had purchased their homes on the bases that the Golf Club was central to the then Mango Hill Development Control Plan (DCP) from its inception, had every right to expect that the North Lakes Golf Course should remain in its current status.

Some 20 residents asked a series of direct and general questions of the Developers as to why the Golf Club could not be retained, the future plans of the owners and seeking guarantees and detailed plans for the future proposed open space. Though passionate at times, the general demeanour of those present was in the main orderly and respectful.)

In short, TVRG failed to convince residents of the merits of the proposed changes with very little detail of those changes being presented.