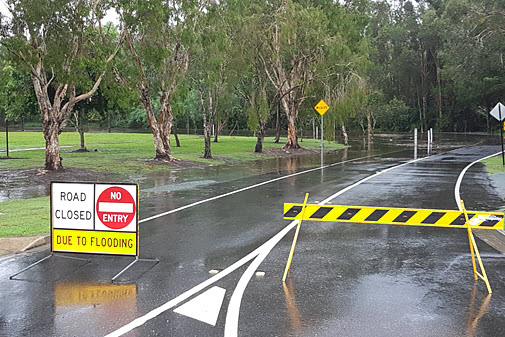 We are currently under a Severe Weather Warning for destructive winds and heavy rainfall as well as a Flood watch.

Mayor Allan Sutherland said current weather predictions showed heavy rainfall in excess of 200mm could be experienced in parts the Moreton Bay Region today, particularly later in the evening and into Friday.

“In the event of severe weather, stay indoors and please limit all non-essential travel. Remember: if it’s flooded, forget it.” Mayor Sutherland said.

“Council will work closely with the Bureau of Meteorology (BoM) and emergency services to closely monitor the impacts of predicted severe weather.

“Monitor any local impacts by keeping an eye on BoM’s weather warnings, radar images and rainfall gauges, which can be viewed on BoM’s website.

“Roads and drainage crews and the SES will be on standby to monitor any potential impacts.”

Sandbags will not stop flood waters entirely. However, suitable placement of correctly filled bags may reduce the amount of water that enters your property.

Sandbag locations in the region include: 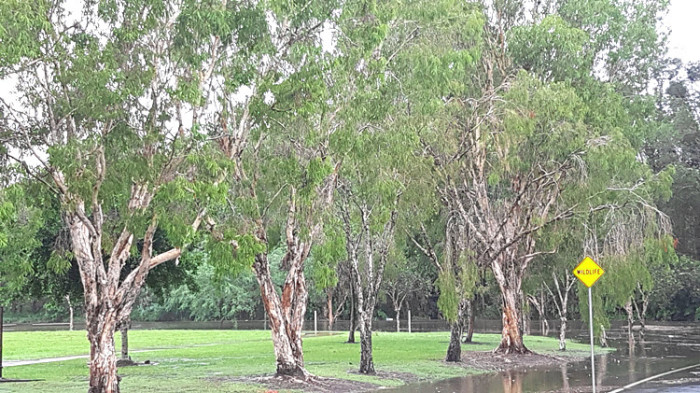 For emergency assistance with damage resulting from heavy rain, contact the SES on 132 500.

Local residents and businesses can register to receive free alerts about severe weather and flash-flooding events via text or voice message and e-mail.  Register online at MoretonAlert or call council on (07) 3205 0555.

Council encourages people to be aware of the potential impact of heavy rainfall around their property. Flood maps are available for download from Council’s website – Floodcheck with handy hints on how to be storm-ready.

For people in the Central Coast and Whitsundays, Central Highlands and Coalfields, Capricornia, Wide Bay and Burnett, Darling Downs and Granite Belt, Southeast Coast and parts of the Central West and Maranoa and Warrego Forecast Districts.

At 11am EST Ex-Tropical Cyclone Debbie was located over inland central Queensland about 130 kilometres west-northwest of Moranbah. The system is expected to continue moving southwards over the central interior of the state today before tracking southeastwards during Thursday.

Ex-Tropical Cyclone Debbie will continue to generate areas of very heavy rain over the Central Coast and Whitsundays and Central Highlands and Coalfields districts today. Currently the heaviest rainfall is occurring over the areas between inland from Mackay. A seperate Severe Thunderstorm Warning is current for heavy rainfall for areas over the Central Coast district. Widespread daily rainfall totals of 150 to 250 mm are expected, with significantly higher totals possible locally. This rainfall will likely be very intense at times, leading to a risk of localised flash flooding. Locations that may be affected include Mackay, Sarina, Carmila, Yeppoon, Moranbah, Clermont, Emerald, Springsure and Rolleston.

The focus for heavy rain will then shift south and extend into the southeastern quarter of the state during Thursday, with further daily rainfall totals in excess of 200mm possible.

This rainfall is likely to lead to major river flooding over a broad area this week, and a Flood Watch is current for coastal catchments between Ayr and the New South Wales border, extending inland to parts of the Central Highlands and Coalfields, Central West, Maranoa and Warrego, and Darling Downs and Granite Belt forecast districts.

Damaging winds, with peak gusts of around 100km/h, are occurring in the warning area, particularly about the coast and islands and also over higher ground inland. Currently the strongest wind gusts are affecting areas north of about Emerald to St Lawrence though the possibility of damaging wind gusts should shift to the remaining warning area as Ex-Tropical Cyclone Debbie tracks south southeastwards tonight. Into Thursday the focus for damaging wind gusts will likely shift to the Capricornia coast and then possibly to the remaining coast near and south of Fraser Island during Thursday afternoon and evening.

Water levels on the high tide could exceed the highest tide of the year, but not exceed warning criteria. Therefore the warning for abnormally high tide is cancelled.

Queensland Fire and Emergency Services advises that people should:
* Move your car under cover or away from trees.
* Secure loose outdoor items.
* Seek shelter, preferably indoors and never under trees.
* Beware of fallen trees and powerlines.
* Never drive, walk or ride through flood waters. If it’s flooded, forget it.
* Keep clear of creeks and storm drains.
* For emergency assistance contact the SES on 132 500.

The next Severe Weather Warning will be issued by 5:00 pm AEST Wednesday.

Warnings are also available through TV and Radio broadcasts, the Bureau’s website at www.bom.gov.au or call 1300 659 219. The Bureau and Queensland Fire and Emergency Services would appreciate warnings being broadcast regularly.

Intersection upgrade for Bonnet Parade gets the go ahead! 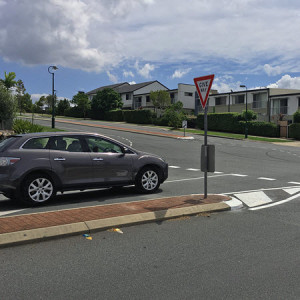 Works to upgrade the Bonnet Hill intersection onto Mango Hill Boulevard have been now been completed!

The Big Local team made Moreton Bay Regional Council aware of safety concerns with the stop sign and the linemarking placement on Bonnet Parade, leading onto Mango Hill Boulevard shortly after the start of the school year.

Division 4 Councillor Julie Greer thanked the local community for bringing their feedback to council’s attention, regarding the intersection of Bonnet Parade and Mango Hill Boulevard, which council worked to address as quickly as possible.

She issued this statement: “Crews will attend the site as soon as possible once the current wet weather clears and move the line marking forward, closer to the intersection, to improve visibility,” Cr Greer said.

“After further reviewing the intersection and motorists’ movements, Council will also replace the stop sign with a give-way sign and associated line markings, to safely improve traffic flow through the intersection.

“Alike all roads across the region, council will continue to monitor traffic movements in this area into the future.”

All works have now been completed since the statement was issued. 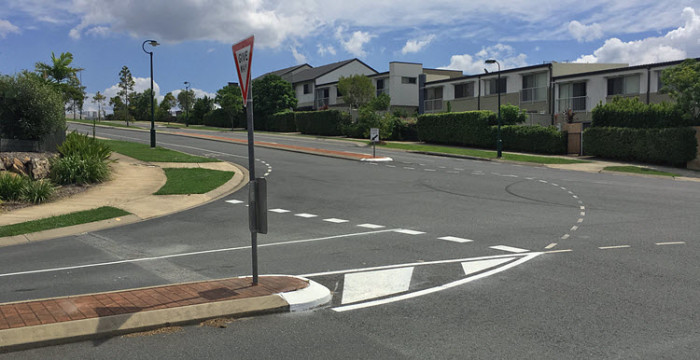 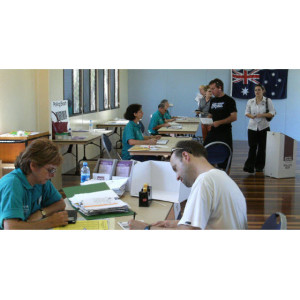 The Mango Hill Progress Association will, from the next State Election, have two members of the Qld Legislature to make representations to on local issues.

The southern and eastern communities of Mango Hill (Halpine Lake, Capestone and the Mango Hill Estate will remain in the modified electorate of Murrumba, to be contested by Steven Miles MP, whilst The Mango Hill Village will move into the new electorate of Bancroft, to be contested by Chris Whiting MP, joining up with North Lakes residents and north to the Caboolture River and including the suburbs of Burpengary & Morayfield, east of the Bruce Highway.

Formed out of the burgeoning seat of Murrumba, the new Electorate of Bancroft is named after Mr Joseph Bancroft, a well-known Doctor who lived in Deception Bay towards the end of the 1800’s. 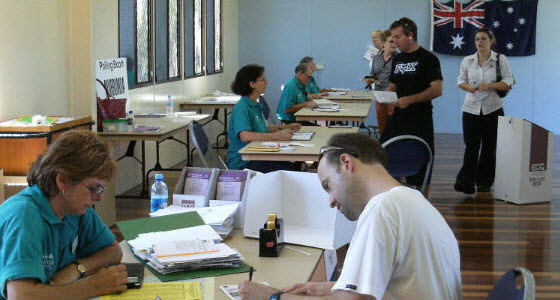 A Dual Polling Booth will allow electors from both Bancroft and Murrumba the opportunity to vote at a centre they have known for many years, while avoiding the frustration and delay of standing in line to lodge an Absentee Vote or being directed to another Polling Booth.

Women’s health and wellbeing is a priority in our Community! 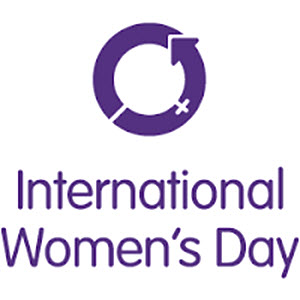 To celebrate International Women’s Day 2017, Snap Fitness are giving away a fitness pack especially for the ladies!!

You could WIN* a 6 month gym membership for you and your daughter (or best gal pal), $400 worth of Personal Trainer sessions ($200 worth each) plus a Gift Pack each! Entry is quick and easy! Good luck!!

International Women’s Day (March 8) is a global day celebrating the social, economic, cultural and political achievements of women. The day also marks a call to action for accelerating gender parity. 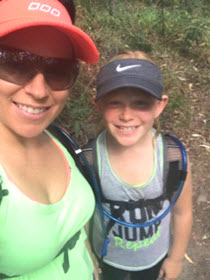 Did you know that Snap Fitness North Lakes is run by Club Manager Nic Storer? She has managed the gym for the last two and a half years. Nic is an active member of our Community. As a single mum of two, she regularly takes part in Community events as well as sporting activities including tennis, mountain climbing, bike riding, kayaking and she is currently training for a women’s triathlon! On top of all of that she is currently studying for a degree in business, doing a double major in management and finance.

Nic does a fantastic job in ensuring the club is a friendly, welcoming place for women to feel comfortable to attend, go and check it out for yourself!

She wholeheartedly supports the ‘Girls make your move’ campaign designed to encourage young women and their families to enjoy physical activity, not endure it.

To find out more information and more local sporting activities that you can take part in, visit – Girls make your move.

*T&C’s apply. Entry is only available for women. By entering this competition, you agree to take part in social media marketing, including live videos and photographs.Existing members are ineligible. This competition is in no way endorsed by facebook. We reserve the right to exclude entrants from the competition at our discretion.